California could overtake New York in coronavirus cases this week


With coronavirus cases nearing 400,000 on Monday, California appears on track to surpass New York as the state with the most coronavirus infections, a sobering milestone for a region that led the country in aggressive shelter-in-place measures and helped dampen the spread of the virus this spring.

After the easing of restrictions last month came a surge of cases across the state. On Monday, California reported 395,398 and 7,746 deaths. New York reported 412,034 total cases Monday and 32,203 total deaths.

Case increases in New York have largely leveled off. But in California and the Bay Area, this month’s average daily increases in coronavirus cases are more than twice what they were last month.

California has averaged 8,129 new coronavirus cases a day in July so far — more than double the 4,007 daily average of June. Bay Area counties have averaged 837 new cases a day this month. compared with 393 in June.

At the same time, although hospitalizations and ICU admissions are increasing across the state, they are not rising as quickly as they did two weeks ago, Gov. Gavin Newsom said in his coronavirus briefing Monday.

“We are seeing a reduction in the rate of a growth, but a rate of growth nonetheless, which only reinforces the seriousness of this moment,” said Newsom, warning that Californians need to remain vigilant about wearing masks and reducing or eliminating social gatherings.

Newsom did make one allowance, saying that Californians will be able to get their hair cut and their nails done outdoors. 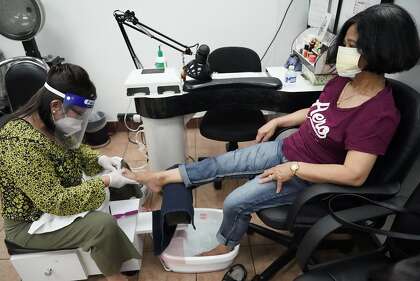 New state guidelines issued Monday cover barbershops and hairstyling except for shampooing and chemical treatments such as straightening, coloring and perms, which cannot be done outdoors. Massages and beauty services, including facials, waxing and manicures, can also move outside, while tattoos, piercings and electric hair removal are excluded because of hygiene requirements.

The guidance gives discretion to counties, ultimately leaving it up to local public health officials where to resume haircuts and other personal care services outdoors.

But on the whole, California has been closing much of its economy again.

Businesses across the state, some of which had been open again for only a few days, were forced to close down last week when Newsom tightened restrictions on dozens of counties being monitored by the state for elevated transmission of the coronavirus. The order closed hair and nail salons, gyms, houses of worship, shopping malls and office buildings, following a similar directive for bars and indoor restaurants, movie theaters and museums.

State officials — who are looking for a way to keep some of California’s economy moving as they battle a growing number of cases and hospitalizations from the virus — have begun to push more of public life outdoors, where experts believe the risk of spread is lower.

“It was our intention to provide for barbershops and the like just to be able to do their work outdoors,” Newsom said Monday. “It turns out that was more challenging than it may have appeared.”

Newsom, who on Friday also blocked schools in much the state from reopening in time for the start of the new academic year, said he was not currently considering outdoor classes as a way to resume in-person instruction for students.

“We obviously are doing everything we can to help the collective, and that is to deal with the background infection rates that fundamentally impact the decisions for schools to ultimately open,” he said.

All Bay Area counties except San Mateo have been placed on the state’s coronavirus watch list, which evaluates counties along six criteria: coronavirus cases, testing, positive test results, a rise in hospitalizations, available ICU beds and available ventilators. Counties are placed on the list if they have a bad trend in at least one criterion for three days running. Across California, 33 of 58 California counties are on the watch list. They contain most of the state’s population. 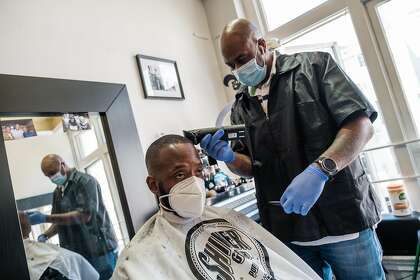 The rising case numbers have had a ripple effects in other areas:

On Monday the California Interscholastic Federation — the governing body for high school athletics in the state — announced a modified schedule for its sports, all of which have been delayed one to four months by the coronavirus pandemic.

On Tuesday, the Marin County Board of Supervisors will consider an ordinance that would create civil penalties for violations of the county’s health orders with a focus on businesses that may not be abiding by certain rules, such as ceasing indoor activities. The move follows the adoption of an enforcement strategy by the Napa County Board of Supervisors last week. Contra Costa County is considering a similar approach.

“The majority of Marin residents and businesses are complying with our public health orders during this pandemic, but there’s been an increasing need for stronger enforcement,” Marin County Public Health Officer Dr. Matt Willis said in a statement. “Ending this health emergency will take a sustained team effort, and our goal with this action is to hold people accountable for actions that jeopardize public health.”


JACKSONVILLE, Fla. – Public health officials are expressing alarm after early data is showing that an overwhelming number of African American residents are among those dying of COVID-19.

Black residents accounted for 72% of deaths from complications of coronavirus disease in Chicago and 52% of positive tests for the coronavirus, despite blacks making up only 30% of the city’s population, according to the city’s public health agency.

Similar conditions mark other large cities with large black populations that are considered hot spots for the coronavirus, including New York, Detroit, Milwaukee and New Orleans. Figures released Monday by Michigan’s Department of Health and Human Services showed African Americans, who make up 14% of the state population, make up about 33% of cases statewide and 41% of deaths.

A new team of city and community representatives will focus on contacting residents who are older than 50 and those considered vulnerable to the virus because of other health conditions to share information about prevention and resources for those who do become ill.

A national civil rights group on Monday said that’s a problem across the country and demanded more transparency on race and ethnicity among the COVID-19 testing results, cases and patient outcomes reported by federal health authorities and state health agencies.

“Equal access to healthcare is a critical civil rights issue, and during this novel pandemic, the public deserves nothing less than full transparency from this administration and state public health officials,” Kristen Clarke, president and executive director of Lawyers’ Committee for Civil Rights Under Law, said in a statement.

One of the nation’s top experts on the pandemic, Dr. Anthony Fauci, said coronavirus is “shining a bright light” on unacceptable health disparities for African-Americans.

There’s a push for data showing the race of COVID-19 patients in Florida and a state senator is pushing for more testing in black neighborhoods.

Data released by the Florida Department of Health over the weekend shows 21% of people hospitalized with the COVID-19 in Florida are black. According to 2018 U.S. Census figures, 16% of Florida residents are listed as black or African-American.

UF Health Jacksonville began an outreach Wednesday to people who live in a public housing project in Jacksonville’s Durkeeville neighborhood lined up to be tested for COVID-19. Free testing is available to people, especially those at least 65 years of age.

“I am not that familiar with the internet,” said 83-year-old resident Suzy Henry. “So I am grateful and happy they are here today making it convenient for people like me.”

African-American and Hispanic populations typically have are higher rates of hypertension, diabetes and high-cholesterol and income disparity can result in a lower level of preventative health care.

“We haven’t quite seen what we’ve seen in Chicago, Milwaukee, in terms of a racial perspective, but that’s why we are out here, So we can learn more and hopefully put in some interventions,” Dr. Leon Haley of UF Health.

“We’re now breaking out by race or ethnicity. (We) don’t have it for every patient, but the ones we do we’re putting it there,” DeSantis said. “We’re also with the University of Florida and Shands … a kind of an investigation into some of the public housing communities … where they maybe not getting what they need.”